Home History Virtue and Vice on Display in The Quarter
Facebook
Twitter
ReddIt
Pinterest
The 300th anniversary of New Orleans has prompted many tributes and special events around the city. Many are what you would expect to see from a governmental bureaucracy: bland. With the history of our home being what it is you would hope to see something more in keeping with our reputation for being both spiritual and the home of Mardi Gras. With a little bit of looking you can find one of the more stimulating 300th anniversary celebrations. In the French Quarter, located between St. Louis Cathedral and Storyville, you will find M.S. Rau Antiques and their exhibition called “Virtue & Vice: An Exhibition of Sex, Saints and Sin.” I am always in and out of the antiques and art galleries along Royal. The thing is, the Rau Gallery is so gorgeous and renowned that I always felt out of place walking in. I got over myself for this and now they will be sick of my face. Upon entering you find an amazing space full of gorgeous artifacts and be greeted by very warm and knowledgable people. You will be tempted to get lost on the ground floor looking at the amazing antiques and art. Do yourself a favor, though: keep your focus and head upstairs where you will find the exhibition. 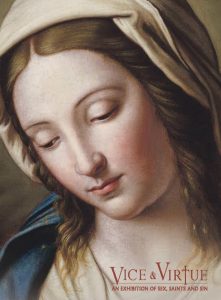 “Virtue & Vice” is split into four components featuring sculpture, paintings, jewelry, and artifacts that highlight the themes of Innocence, Temptation, The Saved, and The Damned. Each display sets the mood with music and each piece is beautifully lit. I went backward through the exhibit. That meant I started with “The Damned.” In this area you will find what you might generally expect but other things too. A striking piece of furniture on display is the Siège D’Amour Love Chair what was designed for Prince Edward VII of Wales (later King Edward VII.) It is like a royal version of a birthing chair though it is made for copulation. There are torture masks, canes with hidden secrets, gambling machines and many other things covering the vices you would associate with the French Quarter.

Continuing on (backwards) you enter “The Saved.” You might feel a bit dirty leaving “The Damned” so cleanse yourself here. You can see Pope Paul VI’s golden cross, Pope Leo XIII’s chairs and a golden chalice. The religious iconography represents the strong ties to the Catholic Church that have always been and remain integral to life in New Orleans. Even if you are not religious you cannot help but appreciate the craftsmanship of the pieces.

“Temptation” includes paintings, vases and figurines meant to show those who have been led by temptation and to titillate the viewer. “The Peeping Roofers” and “The Woman’s Bath” looks like it could have painted depicting a scene from a building just down the street from the gallery.

There are also snakes, because what do we equate temptation with more than that serpent from Eden? My favorite in “Temptation” is “Nu Couché” (Reclining Nude) by Delphin Enjolras. I could wake to this painting every morning for the rest of my life and not tire of it.

Ending up at the beginning you find “Innocence.” Intrinsically the idea of innocence includes an allusion to sin. As light is to dark, without the other neither would exist. This is displayed throughout this part of the exhibition. You can see it in the August Rodin sculpture depicting Innocence being tormented by Cupid. There is also a nearly four foot tall white marble sculpture of Little Red Riding Hood by Joseph Gott, again highlighting the need for temptation to highlight innocence.

This entire exhibition was conceptualized and installed by the staff of M.S. Rau Antiques. It is something that could easily be a featured exhibit in any museum in the world, but you can find it at 630 Royal Street in the French Quarter. “Virtue & Vice” runs until June 9th, 2018 and is open Monday through Saturday from 9am to 5pm. You can find more information on the exhibition at their website https:// www.rauantiques.com/

Virtue and Vice on Display in The Quarter

A Typical Afternoon on Royal Street

Views of New Orleans brought to you by the people who love it most. #itsyournola #nola
Contact us: itsyournola@gmail.com